With schools now closed and the vast majority of the UK population now in lockdown, how have the nation’s viewing behaviours changed? 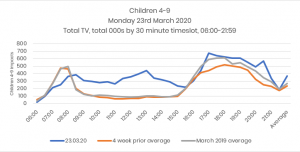 With schools now closed and vast swathes of the population now working from home, we predict, much like we have seen with our international counter parts, viewing to content across all devices and platforms will be on the rise.

Disney will certainly be hoping so, with there arguably having never been a better time to launch Disney+ in the UK market. But how will good old fashioned linear TV fare? Previous research indicates parents now view linear TV as a more secure and trusted “screen time”, so could the country’s state of lock down create a resurgence in viewing?

As the situation develops day by day in the UK, at Generation Media we will be providing daily updates on the impact to the viewing habits of both children, and their parents.

The early reads emerging from the weekend (Friday 20th-Sunday 22nd March) suggest that, with the closure of schools and businesses not yet in full effect coupled with the pleasant weather, the radical shifts in viewing were not forthcoming. However the data did lay the foundations for some interesting behaviour that will likely continue.

Beyond being a primary source of information for many, people are still looking to linear TV for entertainment and inspiration in what looks set to be challenging times. ITV seemingly came to the rescue on Saturday night in the form of Ant and Dec’s Saturday Night Takeaway. Viewing to the 19:30 time slot (total TV) demonstrated a 16 per cent increase for Children aged four to nine, while Housekeepers with Children saw a 44 per cent increase versus the March 2019 average –a year in which the show took a brief hiatus.

In fact so successful was the return, even without a studio audience, that it achieved its highest ever audience with a peak of 11.1m individuals(that’s more than the entire populations of Scotland, Wales and Northern Ireland combined) tuning in, bringing to the forefront the power of family viewing moment. ITV will strive to provide these appointment to view moments to entertain and uplift the nation but we are already seeing the cracks appear with cancelation of Lorraine and Loose Women from its daytime schedule from Monday.

By the time that Monday’s data was released however, the new pattern of behaviour for children aged four to nine was clear. Average viewing for the day provided a 57 per cent increase vs. the previous 4 weeks. Comparing this to Italy (+28 per cent), Germany (+30 per cent) and Spain (+50 per cent) it is easy to draw conclusions about content hungry children in the UK.

Only France so far has reported a greater increase at +68 per cent (although it is early days for the UK and the data is yet to be consolidated). What is most startling however is the increase in viewing across the daytime hours, peaking at lunchtime. 439,000 children aged four to nine were viewing linear TV between 1pm and 1.30pm, a massive 345,000 increase vs. the previous four weeks –that’s a 366 per cent growth.

For parents, as predicted from the weekend’s data, the evening announcements from the Prime Minister have become all encompassing. Over 27m individuals in the UK tuned in for the 8.30pm address to the nation on Monday night, resulting in a 91 per cent increase in Housekeepers with Children viewing vs. the previous four weeks.

Perhaps as interestingly however was the demonstrable increase in the 5pm time slot, with this hour now producing a Pavlovian-esque response as evidenced by the 62 per cent increase in viewing for this audience vs. the previous four weeks.

So is this the new reality? The UK linear TV landscape has continued to struggle over the past three years coming under increasing pressure from Netflix and You Tube viewing in particular. Competition will continue to ramp up over this period with the launch of Disney+, not to mention the abundance of gaming and education content that has already launched this week on YouTube and other platforms.

To combat this, Virgin Media have already announced they will be providing children’s channels to all their customers for free until the end of April, and other key providers such as Sky could potentially follow suit.

This coupled with the increase in potential media hours in the day for content consumption it would not be a surprise to see the UK rivalling France for the largest increase in viewership across this week as parents relax the rules around linear TV viewing to cope with their new reality.

Robert Hutchins is the editor of Licensing.biz and ToyNews. Hutchins has worked his way up from Staff Writer to the position of Editor across the two titles, having spent almost eight years with both ToyNews and Licensing.biz, and what now seems like a lifetime surrounded by toys. You can contact him by emailing robert.hutchins@biz-media.co.uk or calling him on 0203 143 8780 You can even follow him on Twitter @RobGHutchins if ranting is your thing...
@RobGHutchins
Previous Asmodee Entertainment appoints Games Workshop’s Christian Dunn as interactive game licensing manager
Next Riverside Brands signs new licensing partners for Zuru’s Rainbocorns