The NPD Group has detailed the latest insights into the best-selling infant and baby toys, underpinning the UK’s spot at the fourth largest toy market in the world, with the highest per capita spend in Europe.

The Group has confirmed that British consumers spent £3.3 billion on toys in 2018, buying 371 million items.

In the UK, an average of £159 is spent on a newborn’s toys such as playmats, gyms, infant plush, rattles, teethers and soft toys in their first year. As baby grows, toys and play become a crucial part of discovery and learning. Thus, in baby’s second year, the average spent on toys rises to £208, so by baby’s second birthday the total average amount spent on toys is £367. 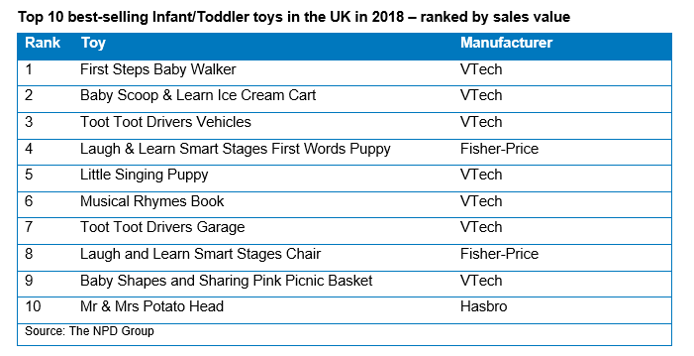 One example is the Tonie Box  – an interactive story-telling speaker with inter-changeable characters. They come pre-loaded with tales which can be supplemented with Wi-Fi downloads for use on-the-go. Such interactive story-telling toys made the top 10 best-seller lists for little ones in both France and Germany in 2018, and the NPD Group expects this trend to take off in the UK in 2019.

Frederique Tutt, Global Industry Analyst, Toys, NPD said: “Toys and play are synonymous with key milestones in early learning, from lying down and discovering the world to sitting stages, crawling, walking and talking so there’s a significant focus on development and learning in the top 10 best-selling baby and toddler toys.”

Robert Hutchins is the editor of Licensing.biz and ToyNews. Hutchins has worked his way up from Staff Writer to the position of Editor across the two titles, having spent almost eight years with both ToyNews and Licensing.biz, and what now seems like a lifetime surrounded by toys. You can contact him by emailing robert.hutchins@biz-media.co.uk or calling him on 0203 143 8780 You can even follow him on Twitter @RobGHutchins if ranting is your thing...
@RobGHutchins
Previous Police bust ‘fake LEGO gang’ in China with £30m seize
Next Hallowed ground: Inside the AIS Independent Toy and Gift Show

ToyNews and its sister title Licensing Biz have been acquired by Alakat Publishing, the publisher of Toy …